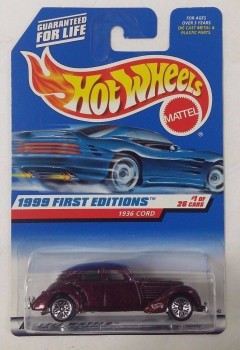 This Hot Wheels 1936 Cord was released as part of the 1999 First Editions Series.

This Hot Wheels 1936 Cord is based on a 1936 Cord 810 Westchester sedan. It featured front-wheel drive, disappearing headlights and a 170hp engine.

Looks like we can expect these to start showing up in stores any time now.

Head over to Hot Wheels Collectors for the full article “What’s Up, Doc? HW Looney Tunes™ Character Cars!” written by Gary Barnum and check out the pics provided as well.

Hot Wheels re-imagines six of your favorite lovable Looney Tunes™ as Hot Wheels Character Cars. They’ll work as expected; they weren’t made by ACME. When they start showing up in January, don’t worry – they mean no harm to our planet. – Gary Barnum 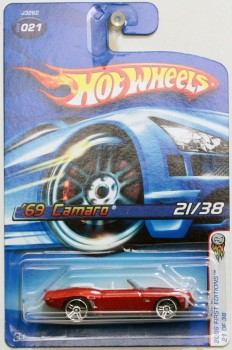 Here, in our second entry, we present the ’69 Chevy Camaro Convertible, which was released in 2006 as model 6/10 in the 2006 First Editions Series!

Real Wheels: The Chevrolet Camaro is an American automobile manufactured by Chevrolet. This casting is based off of the first-generation Camaro which went on sale in September 1966, for the 1967 model year, and was designed as a competing model to the Ford Mustang.