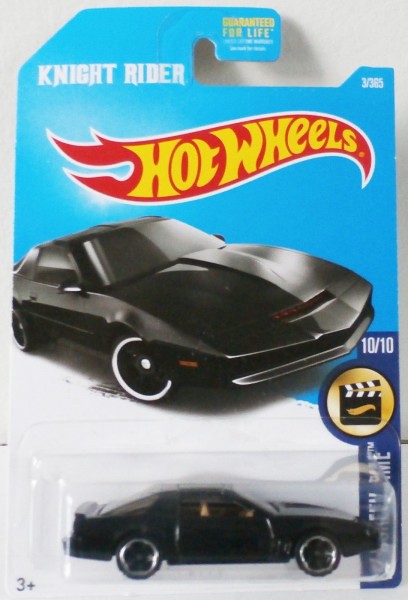 The Hot Wheels K.I.T.T model is based off the real car, designed by Glen A. Larson, which appeared in the TV Series Knight Rider which ran from 1982-1986 on NBC. The Hot Wheels model was designed by Brendon Vetuskey and released in 2017 as part of the 2017 New Model Lineup as model 10/10 in the HW Screen Time Series.

K.I.T.T. is the short name of the Knight Industries Two Thousand, which appeared in the original TV series Knight Rider. K.I.T.T. is an artificially intelligent electronic computer module in the body of a highly advanced, very mobile, robotic automobile. The original K.I.T.T. was a 1982 Pontiac Trans Am and was voiced by William Daniels. In the television show’s history, the first K.I.T.T. (Knight Industries Two Thousand) was designed by the late Wilton Knight, a brilliant but eccentric billionaire and founder of the Foundation for Law And Government (FLAG) and its parent Knight Industries.

K.I.T.T. in the original Knight Rider series was physically embodied as a modified 1982 Pontiac Trans Am with numerous special features such as Turbo Boost (which allowed quick bursts of speed or jumping over obstacles), the ability to drive ‘himself’, a front mounted scanner bar that – among other things – allowed K.I.T.T. to ‘see’, and ‘molecular bonded shell’ body armor, portrayed to be invulnerable to diamond headed drills, small arms fire, the impact of thrown objects, and even high speed impact with cinder block wall. The armor could also resist close explosive blasts although a direct hit could cause severe damage. A refit in the 1985 season included the addition of “Super Pursuit Mode” and a convertible top. K.I.T.T. is essentially an advanced supercomputer on wheels. The “brain” of K.I.T.T. is the Knight 2000 microprocessor which is the centre of a “self-aware” cybernetic logic module that allowed K.I.T.T. to think, learn, communicate and interact with humans. He always had an ego that was easy to bruise and displayed a very sensitive, but kind and dryly humorous personality. He also has an in-dash entertainment system that can play music and video, and run various computer programs including arcade games which Michael sometimes indulged in while K.I.T.T. was driving. According to Episode 55, “Dead of Knight”, KITT has 1,000 megabits of memory with one nanosecond access time.

The 1/64th scale die-cast model is very detailed. It features K.I.T.T.’s iconic scanner bar. A nice feature of this model is the printed dashboard/console for every release. And, although difficult to see, the overhead console detail is cast into the roof of the vehicle.