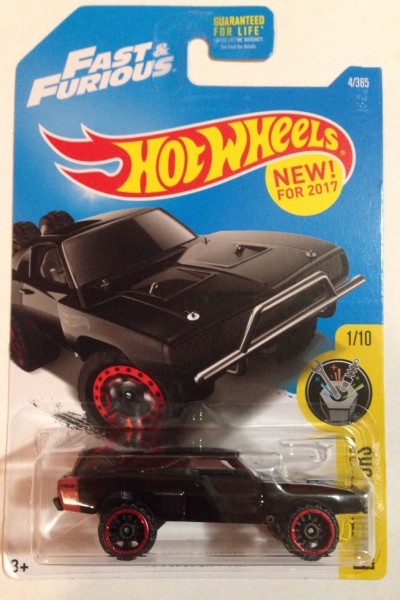 This ’70 Dodge Charger is an exact representation of the “Off Road” 1970 Dodge Charger R/T that was used in the movie Furious 7. The Hot Wheels model was designed by Brendon Vetuskey and released in 2017 as part of the 2017 New Model Lineup as model 1/10 in the Experimotors Series.

When Dominic (portrayed by Vin Diesel) and his team agree to help Mr. Nobody (portrayed by Kurt Russell) rescue a hacker named Ramsey from a terrorist named Mose Jakande, a 1970 Dodge Charger R/T is given to him by Mr. Nobody, who allows Dominic to use any of the cars and any equipment in the garage.

Tej Parker (Chris ‘Ludacris’ Bridges) uses parts from a military jeep to add more weight and power to the Charger. Dom then uses the Charger to reverse out of the hangar of a plane, falling over 10,000 feet (3,000 km) before deploying his parachute. At one moment Dom is surrounded by a group of terrorists as he attempts to escape with Ramsey, and decides to drive down a steep cliff, causing the car to roll over multiple times. Although Dom and Ramsey survive, the car ends up being completely destroyed.

Interesting fact about this die-cast model, is that the designer managed to incorporate working suspension. Protrusions from the interior hold the axles in place. Though they are made from a flexible material, the axles are able to move up and down; like suspension. Another smart design is the way the tires on the back are made. They almost look like black tires, but are actually part of the plastic window piece. Due to the concentration of plastic in the tires, they appear to be solid plastic.