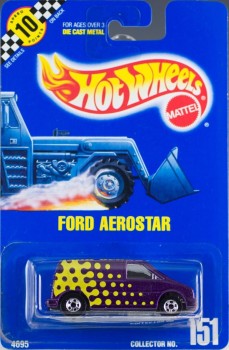 This Hot Wheels Ford Aerostar was released as part of the Collector Number Series in 1991.

Real Wheels:This Hot Wheels Ford Aerostar is based on a minivan that was manufactured and marketed by Ford for the 1986 to 1997 model years in the United States and Canada; a limited number were exported outside North America. Deriving its name from becoming one of the most aerodynamic sleek vehicles sold by the company at the time of its introduction (in spite of being over six feet tall, the body of the Aerostar had a drag coefficient of Cd=0.37, besting the Lincoln Mark VII), the Aerostar was introduced shortly before the Ford Taurus in 1985 as a 1986 model.

Distinguished by its one-box slope-nosed body design, the Aerostar was produced as both a passenger van and cargo van in two body lengths; in contrast to the front-wheel drive Chrysler minivans, it was sold with both rear-wheel drive and all-wheel drive powertrains. Several major components of the Aerostar would be derived from the Ford Ranger; during most of its twelve-year production run, the Aerostar was marketed as part of the Ford light-truck model line.

You may also enjoy –