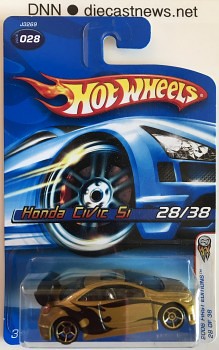 Part of my personal collection, this Hot Wheels Honda Civic Si was released as part of the 2006 First Editions Series.

Real Wheels: The Honda Civic Si is a sport compact trim of Civic by Honda. The Si (Sport Injected) trim was introduced for the third generation of Honda Civics in both Japan and North America. In Canada and elsewhere the trim became known as the SiR for the sixth and seventh generations, and the Si trim was equivalent to the USDM EX model.

For the Japanese and European markets, the Civic Type R was adopted as the high-performance variant of the Civic, starting with the EK9 hatch for Japan in 1996 and then with the EP3 hatch for Europe in 2001. In North America the Type R name has never been used for Honda-branded vehicles (only the Acura Integra), and the Si/SiR badge continues to signify the highest performance trim. The Civic Si contrasts with the more track-oriented and spartan Type R, which has less sound deadening and amenities in return for better performance. The Civic Si has been positioned as more of a full-featured sport trim, featuring luxury options such as a sunroof and a seven speaker audio system.