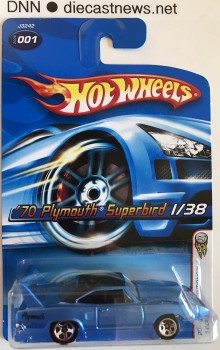 Part of my personal collection, this Hot Wheels ’70 Plymouth Superbird was released as part of the 2006 First Editions Series.

Real Wheels: Developed specifically for NASCAR racing, the Superbird, a modified Road Runner, was Plymouth’s follow-on design to the Charger Daytona fielded by sister company Dodge in the previous season. The Charger 500 version that began the 1969 season was the first American car to be designed aerodynamically using a wind tunnel and computer analysis, and later was modified into the Daytona version with nose and tail. The Superbird’s smoothed-out body and nosecone were further refined from that of the Daytona, and the street version’s retractable headlights (made of fiberglass) added nineteen inches to the Road Runner’s original length. The rear wing was mounted on tall vertical struts that put it into less disturbed air thus increasing the efficiency of the downdraft that it placed upon the car’s rear axle. For nearly 30 years the mathematic formula used to determine the exact height of the enormous wing was thought to be a highly guarded Chrysler secret. In the 1990s a retired Chrysler project engineer (falsely) claimed publicly that the height was determined in much simpler fashion: it was designed to provide clearance for the trunklid to open freely. It should be noted that by a co-incidence the height of the wing was at the optimum level for maximum downforce. The rear-facing fender scoops were to hide cut outs. These cutouts were to allow wheel clearance due to the larger, wider wheels and lowered height of the vehicle for NASCAR. On Daytonas, the scoops were actually for ventilating trapped air from the wheel wells in order to reduce under fender air pressure and lift. For standard road going Superbirds the covers or “air extractors” were a cosmetic enhancement, for looks only.

Due to increasing emissions regulations, combined with insurance hikes for high performance cars and NASCAR’s effective ban on the aero cars, 1970 was its only production year.