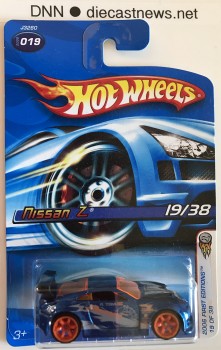 Part of my personal collection, this Hot Wheels Nissan Z was released as part of the 2006 First Editions Series.

Real Wheels: The original Z was sold in October 1969 in Japan as the Nissan Fairlady Z and was sold in Japan at Nissan Exhibition dealerships that previously sold the Nissan Bluebird. It was exported as the Datsun 240Z. Since 2009 Nissan has manufactured the newest Z, the Nissan 370Z.

The earlier models of the Nissan Z were built at the Nissan Shatai plant in Hiratsuka until 2000, while the later models (350Z and 370Z) are built at Oppama (2002–2004) and Tochigi (2004–present). Enthusiasts praise the cars for their looks, reliability, performance, and affordability. Every Z car has been sold in Japan as the Fairlady Z and elsewhere under the names Nissan S30, Nissan S130, Nissan 300ZX, Nissan 350Z and Nissan 370Z.