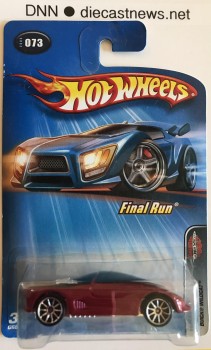 Part of my personal collection, this Hot Wheels Buick Wildcat was released as part of the 2005 Final Run Series.

This weeks selection for Muscle Car Monday is the Buick Wildcat, which debuted in 1993 in conjunction with the release of the Warner Brothers movie, Demolition Man. The Buick Wildcat continued in the Hot Wheels lineup for several years until 2005, when it was discontinued with it’s final appearance as part of the 2005 Final Run Series, which we are featuring here.

Real Wheels: The Buick Wildcat was a full-sized automobile that was produced by Buick from 1962 to 1970. It took its name from a fiberglass-bodied concept car built in 1953. Buick has used the Wildcat name for five different concept vehicles – three in the early 1950s, one in 1985 and another in 1997, with the 1985 Wildcat concept serving as the basis for one of the GM vehicles used in Demolition Man movie and as the basis for the Hot Wheels model.