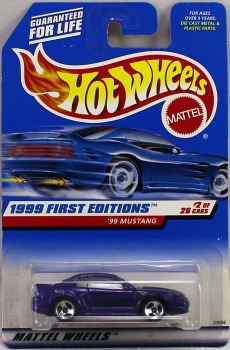 This Hot Wheels ’99 Mustang was released as part of the 1999 First Editions Series.

Real Wheels:The ’99 Mustang is a “fourth generation” Ford Mustang produced by Ford for the 1994 through 2004 model years. For 1994 the Ford Mustang underwent its first major redesign in fifteen years. The design, code named “SN-95” by Ford, was based on an updated version of the Fox platform. It featured styling by Bud Magaldi that incorporated some stylistic elements from the classic Mustangs. A convertible returned, but the notchback and hatchback body styles used in earlier Mustangs were not available.

Prior to the redesigned Mustang’s launch, a two-seater show car was designed by Darrell Behmer and Bud Magali. Called the Mustang Mach III, it was shown at the 1993 North American International Auto Show in Detroit and hinted at what the new production Mustang would look like. The Mach III featured a supercharged 4.6 L DOHC V8 with 450 hp (336 kW; 456 PS). While this engine was not put into production, it hinted to the future use of Ford’s Modular V8 in the Mustang, including the eventual use of a supercharged 4.6 L V8.

Hot Wheels designer Eric Han talks about the new 2017 Hot Wheels 2015 Ford Mustang GT convertible. One of ten models in the 2017 ‘Factory Fresh’ mini collection and designed with a focus on incredible detail this is a great addition to any collection.

Be sure to check back on the Hot Wheels® YouTube channel for more mini collection videos to come!